It’s Not What You Say, It’s What They Hear: Getting Your Messaging Right

Branding is an essential part of building your public image, whether you’re an athlete, executive, or other public figure. And while many people link branding and image seamlessly, many don’t consider the ramifications of public messaging to a personal brand. Therefore, it is essential to not only consider the image you convey to your audience, but also the message as well.

A fundamental rule in communicating your message is that intent and reception are not always one and the same. As Red Auerbach once said, “It’s not what you tell people that matters; it’s what they hear.” Not only is it important for you to be on message; it’s also critical that your audience interprets the message in a way that matches your intentions. Far more than merely the words used come into play when decoding communication; intonation, facial expressions and even where you look when speaking can all have a significant impact on the listener’s interpretation.

THE ART OF ENCODING

In any form of communication, the goal is to convey your message as clearly and unambiguously as possible. The challenge, then, is to learn what barriers might stand in the way of accomplishing this. 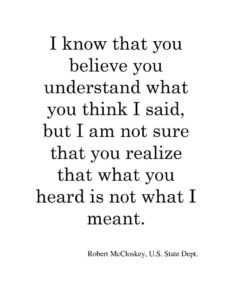 One of the first, and most obvious, barriers is language. If you are providing your message in a language that the intended audience cannot understand, it does not matter how carefully your words are chosen. When linguistic barriers prevent you from providing the best messaging possible, it’s wise to consider either expending the effort to improve your language abilities in the given language or to work with someone able to bridge that gap for you, such as an interpreter or translator.

Beyond obvious linguistic barriers, there are still many ways to promote a message conflicting with your intentions. For instance, regional colloquial terms may not resonate with an audience from a different geographical area. Culture also plays a role in interpretation of language and could skew the reception of your message. Overly formal or informal messages that are out of place in your audience’s culture might send a signal you do not intend to send.

YOUR MOUTH ISN’T THE ONLY PART OF YOUR FACE THAT SPEAKS: NONVERBAL CUES IN MESSAGING

Especially in visual mediums, such as television appearances, press conferences, and videos, it is equally important that your body language matches your spoken words. As the idiom goes, “actions speak louder than words”- and your body language speaks even louder!

We’ve all witnessed a public appearance that demonstrates this. Ever witness an after-game interview with the player’s arms crossed and a smirk on his face, while he extolls praise on the hard work of his teammates? Most likely, you walked away with a very different perspective of that player’s meaning than what he claimed, and that leads to a feeling from the audience that the player is disingenuous.

What’s more, the player may well be woefully unaware that such small details are noticed by his viewers, or perhaps that these micro-expressions are even happening. To combat this, the speaker must be especially aware of his or her body language, positioning, and facial expressions to ensure alignment with their messaging.

CONCLUSION: PROMOTE YOUR MESSAGE FOR SUCCESS

A clear, concise message targeted at the specific audience has the best chance for success. What’s more, body language that matches the spoken message prevents unnecessary misunderstandings and broken trust in the messenger. Preparation is perhaps the best method to avoid common traps; by anticipating the barriers your audience might face, and taking preventative steps to bridge them, you’re more likely to send the right message!