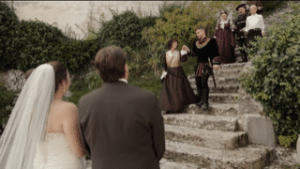 A bride, a groom, and an interpreter walk into a bar…. Well, in our case, it wasn’t a bar, but a castle! This was no joke. It was the start of our fairytale wedding in Bled Castle. In Slovenia, all legal marriages are conducted in the national language. My wife and I do not speak Slovenian, but we would have our ceremony no other way. We each have roots in countries of the former Yugoslav republic – Slovenia for me, Macedonia for her. Getting married in the language of my heritage was a thrill and an honor. Afterward, we traveled to my wife’s Macedonia for our honeymoon. That trip could have used an interpreter at times, but that’s another story!

Common sense would dictate that the bride be the centerpiece of a wedding story. And she certainly was! My princess bride arrived by horse and carriage through the castle’s outer gate, bejeweled and bedecked in brilliant white on an Alpine afternoon. Now suspend that thought for moment. For the purposes of this piece, our focus will be on the interpreter in the white blouse and lapel microphone. This is herhighlight reel.

This. Interpreter. Worked it!

She rose to the occasion with regal aplomb befitting our setting. She spoke the Queen’s English with exaggerated eloquence. At first, I thought it was affected for show, but that thought lasted only a moment. It became evident that she spoke English that way naturally. It was my American ears that were being pretentious.

Without our interpreter, our wedding ceremony could have seemed passive, vaguely solemn, or just plain foreign in an unfulfilling sense of the word. Instead, it was a heightened experience that neither of us will ever forget. The linguaphile in me was soaking it up in both languages, even though I could only understand one of them. I am in awe of the ability and responsibility of an interpreter. In any language, the spoken word is far more fluid than the static text of the page. Language out loud is lyrical. Curated sound carries real-time emotion expressed in the timbre and rhythm of the interpreter’s immediacy. When the moment demanded, she spoke delicately. Her cadence was cool and calm and properly punctuated. She pivoted effortlessly to enunciate effusively for all the medieval merriment after the ceremony. Some of these scenes were reminiscent of the film Robin Hood: Men in Tights. Thankfully, I was not one of the men wearing tights.

Our Slovenian spokesperson continued to exceed expectations. She contributed some “cultural brokering” of sorts – a role an interpreter can play beyond that of a conduit for the language itself. In this role, an interpreter provides supplemental information to offer insight or to dispel a potential misunderstanding arising from differences in culture. She had worked with the officiant (also a woman) on many weddings in the past. Based on these experiences, our interpreter noted a departure from the marriage commissioner’s typical clinical style. Of course, my wife and I would have had no basis for comparison at all, so we were grateful for the following anecdote.

Our intrepid interpreter felt moved to disclose how our civil celebrant rarely waxed poetic. We were witness to a special telling of a Slovenian poem, along with improvised content of an unusually heartfelt nature. Lucky us! According to our interpreter, she was swept up by all the blatant love and laughter and the friendship of our families gathered in the hall. She could not help but share in the love. *Sigh*

The formal ceremony wrapped up in the Knight’s Hall, and the wedding party wound its way up stone steps to a courtyard overlooking Lake Bled, which glistened like glass hundreds of feet below. We were greeted by the lord and lady of the castle who were accompanied by a small retinue. They were all clad in medieval garb. Yep, we’re talking tunics, tights, and pantaloons. Okay, they weren’t really royalty. We hired an acting troupe for this part, and it was totally worth it! They offered a whimsical counterpoint to the official ceremony. Descending a stairwell from above the courtyard, the lord of the castle boomed a benediction upon us with all bombast. The lady of the castle soliloquized a Slovenian folktale of lasting love. And all of it made wonderful sense in English because of our skillful interpreter.

We were so fortunate to have such a consummate professional in her craft, brokering the beautiful sounds (and silences) between two languages. And all this on the special day of our wedding. Sprinkle in bits of medieval court dance, some sword play, a fire juggler, and a jolly friar; and you could say our interpreter earned her keep that day. Well deserved!

To learn more about LTC and interpretation call us at 888-456-1626 or visit us online at LTClanguagesolutions.com.