‘Tis the Season: Holidays Around the World

The holiday season is fast approaching in the United States. Christmas trees can be seen in windows, and families are preparing to gather around the table to celebrate Thanksgiving. Other cultures, however, have their own holidays to celebrate. Now is a great time to learn about some important holidays around the world!

Songkran is Thailand’s New Year celebration, and it is often called the “Water Festival”.  It begins on April 13 and lasts for 3 days.  The word “Songkran” means “passage”, representing transformation.  In the mornings, it is common to pour water on the statues at Buddhist temples as a sign of purification.  Younger individuals will also pour water on the hands of their elders as a symbol of respect.  There are also wild celebrations in the streets in the form of water fights followed by sharing of family histories and reflecting on fond memories.

La fête de la musique, or Make Music Day, is celebrated on June 21. Although it originated in France in 1981 to promote the arts, the holiday is now celebrated in over 120 countries all over the world. Musicians of all genres and skill levels are invited to perform on city streets and squares for public enjoyment. The holiday’s slogan is Faites de la Musique (“make music”, and a homophone of fête de la musique). 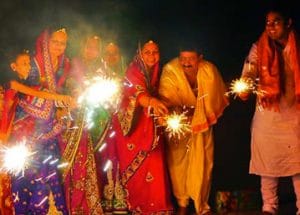 Diwali is India’s biggest and most important holiday of the year. It is one of the major festivals of Hinduism and it is celebrated in October or November. Diwali is celebrated with family gatherings, clay lamps, fireworks, lights, bonfires, flowers, etc. Diwali is a five-day festival with its main theme being the triumph of light over darkness and good over evil. The festival coincides with the Hindu new year. Diwali is also a tribute to the Hindu goddess of wealth, Lakshmi.

In China and other neighboring countries, there is Mid-Autumn Festival 中秋节 which also takes place on the full moon on the 15th day of the 8th month of the lunar calendar. In this festival, people eat and gift moon cakes, hang lanterns for their loved ones, and enjoy the magical legends of people and the full moon. Moon cakes 月饼  represent family reunion, contain the filling of bean and nut pastes with an egg yolk center, encased and baked in a ground rice flour pastry decorated with symbols and designs. On a side note, in China, there is a separate ceremony in the Spring which commemorates ancestors and cleans the gravesites.

Chuseok (or HanGaWi) in South Korea, is often referred to as Thanksgiving and a very important holiday usually on the 15th day of the 8th month on the lunar calendar. (in the middle of September). In Korea, every family member puts on their new clothes (the traditional Hanbok or their modern style), goes to their eldest living relative’s home in their hometown, and prepares a banquet for their ancestors. A full body bow to the ground is given to the banquet table in a special ceremony, and then the food is eaten as a blessing from the ancestors. Families make songpyeon 송편 together, a colorful, pounded steamed rice casing with honey and sesame seed, or chestnut paste filling. A good rice harvest as well as the family reunion are celebrated through this special food. Families enjoy other special traditions such as cleaning the gravesites of their ancestors, a women’s traditional dance in a circle, and a men’s Korean traditional wrestling tournament. 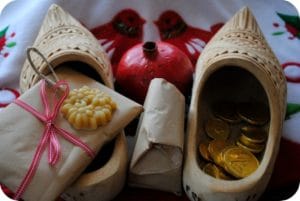 St. Nicholas Day is a poplar holiday among both Western and Eastern Christian countries, and is most commonly celebrated on December 6th. Saint Nicholas, the man for whom this feast day was named, was born in the 3rd century in Turkey, and became a Bishop in Greece with a well-known habit of secret gift-giving, such as putting coins in the shoes of people who had left them out for him.  This gave rise to the modern-day Santa Claus who brings presents on Christmas Eve. St. Nicholas Day is celebrated in much the same way. In some European countries, such as Germany, families often choose to exchange gifts on December 6th rather than December 25th, and St. Nicholas Day remains a more important holiday than Christmas.

Chinese New Year, based off of the lunar calendar, falls on Saturday, January 28th in 2017. This is the most important holiday in Chinese culture and marks the start of Spring Festival- a 15-day celebration of the new moon, new beginnings and hopefully more luck! 2017 will bring the year of the rooster. Roosters are known for being hardworking, honest and observant. If you were born in a rooster year, make sure to wear red for good luck.

Another common tradition during this time is setting off fireworks. Starting on Chinese New Year Eve through the 15 day festival, fireworks and firecrackers can be heard in China around the clock. Fireworks are set off to scare away the evil spirits, so, the louder the better!

Chinese New Year is time for family to reconnect, eat good food, and celebrate new beginnings. So, after you eat dumplings and set off fireworks, relax and gather around the television to watch The CCTV Chinese New Year TV Gala- which is viewed by over 900 million people every year!